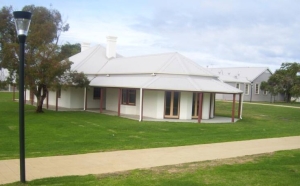 The records show that the Woodman’s Point Quarantines Station was being used for the quarantining of people and of cargo as far back as the 1830’s. However – it was not until 1885 that a tender for a quarantine station at Woodman’s Point was agreed on and the first building was completed in 1886.

In the years to come, the Government soon realised they did not have appropriate accommodation or holding facilities to cope with large amount of passenger vessels with quarantine concerns.

Extensions were made to the Woodman’s Point Quarantine Station in 1901 which included a new tram line from the Jetty (The Jetty is no longer standing) to the Fumigation house. More work was done during World War 1 and the buildings at the Quarantine Station were modernised and expanded.

Keeping Infectious diseases like the, Bubonic Plague – Small Pox – Venereal diseases – TB and Spanish Flu, under control and trying to save peoples’ lives was a full time battle for the staff at the station.

Many members of the staff (Nurses and Doctors) at the Station contracted these diseases and in some cases they lost their lives too.

The old Quarantine Station is now run by the Department of Sports and Recreation, and now days they run children’s camps from the site. The DSR has fully restored around 90% of these wonderful old buildings to their original condition, and the buildings are now under the protection of the National Trust. Here is a list a few of few of the buildings one will find at this very historic site: Two Hospitals – Fumigation house – male and female shower block – Doctor’s surgery and crematorium. (the crematorium has rarity value as Australias first crematorium and this intact facility is therefore the nations oldest extant crematorium.)
.
As one can imagine with such a rich history of illness and death, The old Quarantine Station has had many reports super natural activity. These paranormal activities have also been experienced by Rebecca and many others, while they have been on tour at this site!